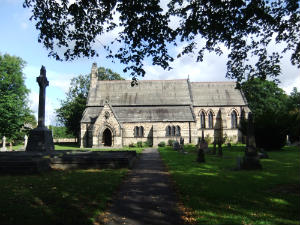 Bournmoor village is in County Durham, in the north east of England, a short distance from Chester-le-Street, home to Durham County Cricket. It lies on the edge of the Lambton Estate and contains St Barnabas' Church, which houses The Angel of Victory,  given to the church by the fifth Earl of Durham and sculpted by Waldo Storey who completed the work in Rome in 1894. Ann Wilson's Church history states:

An outstanding feature in the north aisle is the Angel of Victory, a large statue of white Italian marble on a blue-grey pedestal.

John Frederick, the fifth Earl of Durham, in memory of his uncle John George, third Earl, and his father Frederick William, fourth Earl, gave this monument to the church. John George and Frederick William were twin brothers, Frederick William succeeding his brother but only surviving him by four months. The Angel of Victory was dedicated on 29th June 1929 by Herbert Hensley Henson, then Bishop of Durham.

The statue had been in Lambton Castle since 1894. The story goes that it was brought from Italy in the ballast of a ship, and brought on a cart from Fence Houses Station.

The task was very difficult owing to its huge size, 15 feet high and with a wingspan of 7 feet across. The angel’s wings were unhooked to help it into the church. To get it into church one of the pillars at the entrance had to be taken down, doors removed and several pews removed.

For much of the 20th Century, "Bournmoor" was known as "Burnmoor", taking its name from the Moorsburn (an alternative name for Hutton Burn which runs through the village.

Mid-19th century Ordnance Survey maps show the old core of the village, which was used as  staff housing for the Lambton estate, as "Wapping", with the open country to the south of the Sunderland road and north west of Herrington Burn shown as "Bourn Moor" and the colliery complex which was later known as Lambton is shown as Bourn Moor Colliery. By the end of the 19th century, maps show the settlement as "Bournmoor". Maps produced after the development of the 'Flowers' estate, dated between 1920 and 1960 show both as "Burnmoor" but they reverted to "Bournmoor" in later maps.

The following information is reproduced by kind permsission of the 'All things Bournmoor' website. Please click here for more details.

'What we now know as Bournmoor village did not actually come into being until 1865 when the ecclesiastical Parish of Bournmoor was constituted out of Penshaw Parish by an order in council of Queen Victoria dated December 28th, 1865. Prior to this, the village was known as Wapping and the village name was changed at the time of the church parish being formed due to the bad reputation endured by the Wapping area of London. The whole Bournmoor area was once known as 'Biddick Fence', 'Biddick' meaning 'by the ditch' and 'fence' implying an enclosed area. The township of Bournmoor, formerly Biddick Fence, comprising the Lambton Estate, Wapping, New Lambton and Elba was separated from Biddick Fence before 1791.

The stream which runs past the Floaters Mill public house and flows on into the river Wear at Chester-le-Street was known as the Lumley Park Burn as well as the Moor Burn, or Moors Burn in these upper-reaches and it is believed that this lead to the name B(o)urn Moor.' 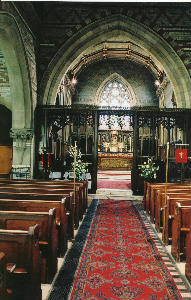 In 1948 Thomas Westgarth published 'The Story of Burnmoor Church, County Durham.'  He said in his publication 'This nineteenth century parish church is a worthy and seemly house for the worship of God and finds a warm place in the hearts of not only the inhabitants of the village of Burnmoor but also of church goers in many surrounding districts. It does not possess any ancient .history nor does it aspire to anything but what it is, a homely house of God and as such is beloved by all who worship there. The church is dedicated to St Barnabas and was built at the sole charge of George Frederick D'Arcy Lambton whose wife Beatrix Frances, Countess of Durham, laid the foundation stone on 3rd May 1867. 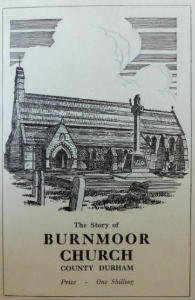 The surroundings of the church cannot fail to impress, the entrance to the churchyard is from the north, its footpath winding through an avenue of trees to the south porch; the south aspect is of a rolling countryside looking across a typical English country cricket field to the ancient Saxon village of Newbottle. The north looks upon the well wooded old rectory grounds within Lambton Park. As we approach the building we find it built in the Early English style with a turret at the western end with one bell; internally there is a chancel and nave of three bays, north and south aisles; the chancel is elegant and beautifully decorated.

When we enter the church we are at once struck by the contrasting north and south aisles, the former with its high almost flat roof and the latter with its low wall and steeply sloping roof. The north aisle as it is today was heightened and enlarged by John George the third Earl of Durham in 1881 in memory of his father; the roof timbers of English Oak were obtained from the Lambton estate, the cost of enlarging was £1,732 and was executed at the sole charge of his lordship. The church now has a seating capacity of 320 worshippers In the same year the chancel was enriched and beautified by the parishioners in grateful remembrance of the builder of the church. In 1888 a faculty was secured which gave authority to further enrich and improve the chancel, consisting of a richly carved oak screen, reredos, and panelling, mural decorations to the design of Johnson and Hicks of Newcastle upon Tyne.

The most outstanding feature of the interior of the church is a huge monument built of white Italian marble on a blue grey pedestal and fashioned in the form of an angel of victory. The monument was given to the church by the fifth Earl of Durham in memory of his uncle, the third Earl and his father, the fourth Earl. The Angel of Victory is placed in a commanding position in the north aisle and was dedicated on 23rd June 1929 by Dr Herbert Hensley Henson, the then Bishop of Durham. The sculptor is Waldo Storey RA who completed the work in Rome in 1894, the total cost being £3,200.

On the wall of the north aisle is a painting of the "Madonna of the Armchair"; it is a copy of a Raphael and was purchased from the monks of St Mark's. Florence. The picture was presented to the church as a memorial to Dr Alfred Merle Norman by his great niece Miss Agatha Norman and was unveiled on 20th October 1935. Dr Norman was the first incumbent of Burnmoor Parish; born in 1831, he held the living from 1866 to 1895 and died in 1918. The altar table was provided in 1910 by the parishioners as a memorial to Queen Victoria. The organ was built by Gray & Davison of London.

The church contains a number of memorial windows which will be described in a separate article at a later time.

The churchyard contains an outstanding monument erected to the memory of Beatrix Frances Countess of Durham who died on 21st January 1871 which stands over the family vault of the Lambtons. The monument is in the form of a cross designed by Thomas Drew and was made in Dublin by Walter Doolin in 1873. The cross is made of Irish limestone and is an exact reproduction of the famous Irish cross at Monasterboice, a village in the County of Louth, Eire.'

St Barnabas, born Joseph, was one of the earliest Christian disciples in Jerusalem. According to the Bible in Acts 4.36 Barnabas was a Cypriot Jew. Named an apostle in Acts 4.14, he and Paul the Apostle undertook missionary journeys together and defended Gentile converts against the Judaizers. They travelled together making more converts (c 45-47), and participated in the Council of Jerusalem (c 50). Barnabas and Paul successfully evangelized among the 'God-fearing' gentiles who attended synagogues in various Hellenized cities of Anatolia.

The story of Barnabas appears in the Acts of the Apostles, and Paul mentions him in some of his epistles. Tertullian named him as the author of the Epistles to the Hebrews, but this and other attributions are conjecture.

Although the date, place, and circumstances of his death are historically unverifiable, Christian tradition holds that Barnabas was matyred at Salamis, Cyprus, in 61 AD. He is traditionally identified as the founder of the Cypriot Orthodox Church. The feast day of Barnabas is celebrated on 11 June.

Barnabas is usually identified as the cousin of Mark the Evangelist on the basis of Colossians 4,